Dog lovers out there are all out looking for sound parenting advice, so I’m here to help.

I’ll start by scolding the people out there who let their dog run around the streets off leash, because one of those dogs ran up behind my dog Giles the other day and latched onto his back leg.  I have a beagle and this attack dog was about the size of  a Jack Russell terrier.  This is to say, even if your dog is not big, he can do damage.  Because three days later the holes he made were looking angry, despite careful cleaning, and Giles’s leg had swollen up to nearly twice its size.  So he ended up at the vet and his head ended up encased in a cone of shame.  Poor Giles, and screw you people who let their dog run around off leash on my street.

This is where the angry bit ends and the parenting bit begins.

Some days after the cone of shame was donned, baby Logan discov 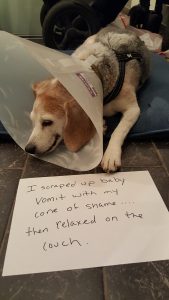 ered the joys of vomiting.  The short sprint from bedroom to bathroom thoroughly covered every surface with delicious, delicious vomit.  (That surface coverage included every inch, from hair to feet, of Mommy.)  Giles, being the helpful beagle he is, instantly rushed into clean up duty.  It isn’t easy licking vomit up from the floor while wearing a cone of shame, but he would not shirk, and if the cone of shame happened to scoop up baby vomit along all its edges as he went, that would not deter him.  Giles is no slacker!  And when relieved of duty by Daddy, he made sure to scamper quickly down the stairs and into the living room with his vomit covered lampshade head, where he might recline on the couch for a time and bask in his successful clean up job.

I think we can end it there.  I mean, we parents don’t really want advice anyway.  We mostly just want to complain and laugh secretly at other parents’ disasters.