I’ve been living overseas, so I’ve missed out on a lot of the big marches and movements over the past few years and months. (But you bet your bottom I voted and write my representatives.)

But, I’ll be in the US visiting family in Florida this year during the April 22 March for Science, so I’m going.

Confession?  This will be my first ever march.  For a lot of reasons, good and bad.  But at this point, I really have had it with both Trump and the Republican Party’s agenda.

I’m a scientist, a cancer researcher.  I do not want to politicize science.  But the reality is, almost nothing can be entirely free of politics.  (Heck, I just heard on the radio that bathrooms in North Carolina will be under State jurisdiction.  Bathrooms need a jurisdiction?)

Research is expensive and time consuming, and the best of it is not always profitable.  That means that private funds alone will never be able to fully drive scientific endeavor.  This means the government gets involved, as it should.  What it shouldn’t do is try to use funding to select only science that fulfills partisan wishes or shut down scientific discourse with the public.  This has ended poorly for every government that has tried it.

So there, that’s why there’s politics.  But I’m marching for more.  I want money!  Yeah, you heard me.

The proposed budget makes deep cuts in science (among other things) while growing the military.  Don’t get me wrong, we need a strong military.  We need to take care of our soldiers, who are putting themselves in danger for our safety.  But scientific endeavor, technological advancement, and intellectual daring made this nation great.  Investing in research, investing in educating our children, investing in new technologies, these things build a great country.  These things make jobs.  These things make a future.

When we drop environmental regulations, we aren’t just damaging our planet and our future, we’re damaging our economy.  We lose ground on technological advances that other countries will be making, and we lose the markets of countries that don’t want wasteful, backward technology.  In the long run, we lose jobs.

One of our greatest assets is our university system.  If we don’t fund it, all those bright minds from other countries will find elsewhere.

And if we don’t fund basic scientific research?  We lose early career scientists.  We lose the knowledge we’ll gain.  We lose potential treatments.  We lose lives.  My dad is dying of cancer right now.  No, scientific research has not found a cure yet.  But it has extended his life from the few paltry months he might have had to years.  He got to see me graduate with a PhD, get married, have a baby.  I’m still going to lose him to cancer.  It’s going to suck.  But research needs to keep moving forward so we can keep getting more out of our lives.

Maybe a big border wall and a huge military* make you feel safe.  But they don’t make you safe.  They won’t build a country, they won’t make jobs for you, and they definitely won’t make jobs for your children.  They probably wouldn’t have saved the 13 people that died in terrorist attacks in 2014, and they certainly wouldn’t have helped the nearly 2 million people that died that year from illnesses such as heart disease, cancer, infections, lung diseases, cerebrovascular diseases, and all the other things that scientists are working to fix. 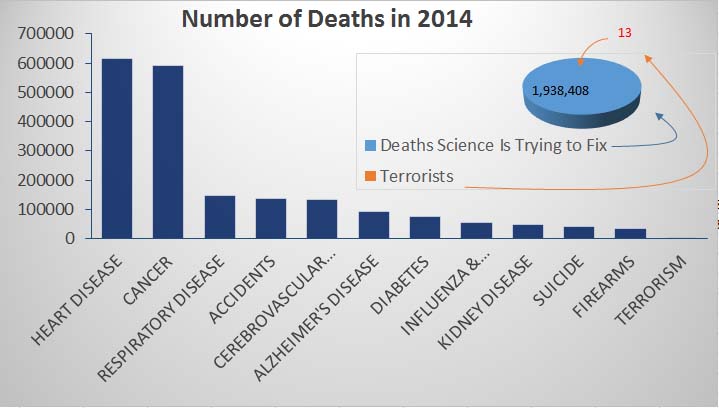 And all that?  That just scratches the surface of why I’m marching for science.

*No, I don’t know what the answer to terrorism is, but I do know it has to involve more than the military, and it cannot involve alienating the billions of Muslim allies that we’ll need to understand terrorism.