Another story for one of Logan’s toys.

The Story of Dragon MacFlappywing

There were many fearsome dragons in the land of Boo, but the land of Oob hardly had any at all.

When dragon MacFlappywing came to the castle he breathed his fiery breath and roared.

“Have you any babies in your empire?” he demanded. 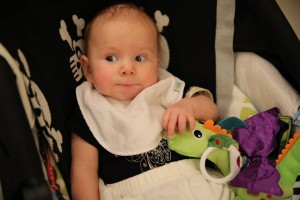 “The King and Queen were afraid. They lied and said, “No, not a one,” though their very own baby lay hidden in the Queen’s robes.

But then their very own baby gave a loud cry and Dragon MacFlappywing knew it was a lie.

Quick as only a dragon can be he swooped down and snatched the baby from the Queen.

“And now I am going to KISS THIS BABY!” Dragon MacFlappywing roared.

The Queen leapt up with a shout. “DRAGON!” she roared. He stopped with his lips only inches from the baby’s nose.

“You should always ask before kissing someone’s baby.”

Embarrassed, Dragon MacFlappywing asked if he could kiss the Queen’s baby. Graciously, she allowed it.

The King shook his head. “A baby-kissing Dragon. No good will come of this.”

“Now!” Dragon MacFlappywing roared. “Do you have any sheep?”

But one day, a sorcerer came from the land of Boo. When he saw Dragon MacFlappywing kissing babies and cuddling sheep, he grew very upset.

“Dragons do not kiss babies and cuddle sheep,” he cried. “They eat them! This will not do. It cannot be!” He demanded that the King and Queen put a stop to it, but they would not.

So the Sorcerer cast a spell to make Dragon MacFlappywing eat babies and sheep. But the spell went all wrong! Suddenly, it was all the people that wanted to eat babies!

Dragon MacFlappywing knew this could not be. Quickly, he collected every baby in the empire.

And all the sheep.

Safe in his dragon’s lair, Dragon MacFlappywing watched over the babies, but he knew it could not be this way for ever. Babies needed their moms and dads!

He flew to the sorcerer and breathed his fiery breath and roared and demanded the spell be lifted. But the sorcerer was not actually such a good sorcerer after all, and did not know how.

Dragon MacFlappywing thought furiously. Then he came up with a plan. First, he would have to pick the cutest baby in the empire. But that was harder than it sounded! All the babies were just so cute! So he closed his eyes and reached out and grabbed one at random.

And everyone who kissed the cutest baby in all the empire was cured!

And so finally, when every person in all of the land of Oob, including the sorcerer, had kissed the cutest baby in the whole empire, Dragon MacFlappywing was able to return all the babies safely to their homes.