Now that we have a baby around, we’ve realized how boring our walls are and have started putting up various decorations. I’ve been making up stories for Logan when he finds one particularly interesting. These wall stickers were called “The Magic Gramophone.”  This is their story. 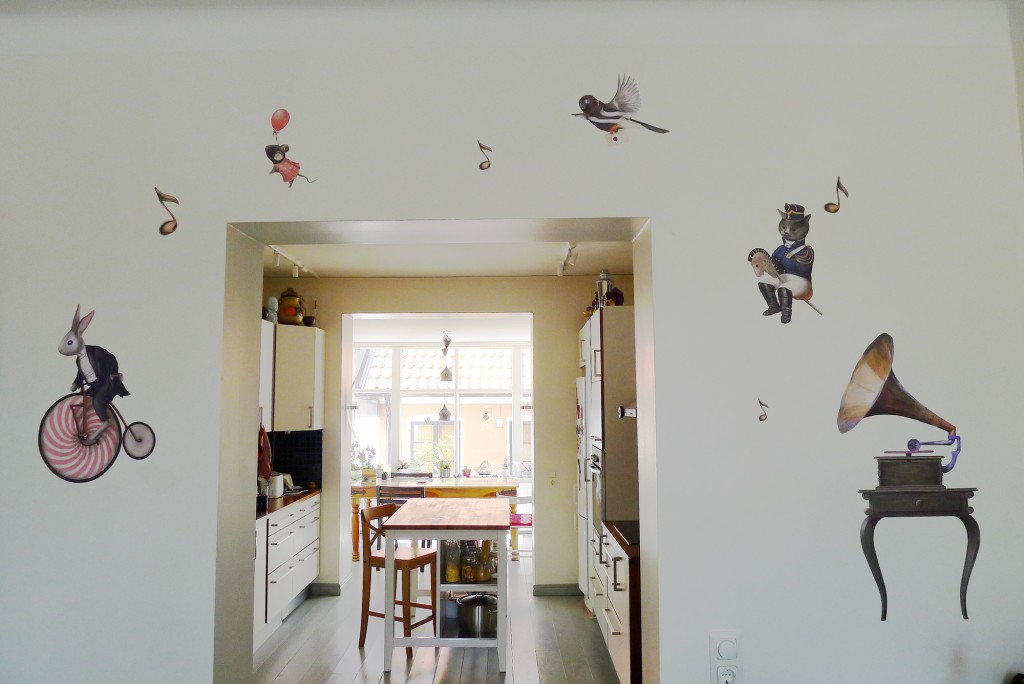 There was once a lonely old man who loved animals. He had been a veterinarian all his life and loved to help any animal in need. But that was a long time ago. He had long since retired. His wife had died some years ago, and he’d never had children.

But the old man never stopped caring for animals.

He once found a bunny that had been chased and bitten by a dog. He fixed him up and cared for him until he was better, then let him go free.

He once found a mouse living in his house. He couldn’t have her pooping in his towel drawer, but he didn’t have the heart to send her away. So he made her a little home, and she lived the rest of her life on his desk.

He once found a sparrow with a broken wing. He took her in and mended her wing. Then one day when she was all healed, he let her outside to fly away.

He once found a cat hiding under his porch. She had been in a terrible fight. The old man took her in and cared for her and shared his home.

By far his oldest companion though was his best friend, his dog Mobius. They’d been friends for fifteen years. Mobius kept the old man company, took him for walks, and held the loneliness at bay.

But one day, Mobius too died and left the old man alone but for the cat who was by now healed. The old man considered getting another dog, but he was old and knew he would not be able to keep up with a young pup. And what if the old man were to die and leave the dog alone? No, it was best to keep company with the cat.

But then one day, the cat, too, left him. He looked everywhere, checked every warm sun beam, every closet, every cushion, but the cat was not to be found. The old man was truly alone.

A few days after the disappearance of the cat, there was a knock at his door. A delivery woman hefted a large box onto his table for him. She left with a tip of her hat. There was nothing on the box to say who had sent it. When the old man opened it, inside stood a gramophone.

The old man had not seen a gramophone since he was just a little boy. It was an antique even then. Still, when his father put a record on it, it played beautiful music. Packed in with the gramophone was a fat black record. It had no label to say what it was. He placed it on the machine, dropped the stylus, and played the record.

The first sounds to come out were sad. Tears came to his eyes as lonely notes poured forth. Then something changed. The tune grew fast and cheerful, and out of the gramophone hopped a bunny wearing a tuxedo. He dragged a penny-farthing behind him. He straightened his tux, popped a leg over the penny-farthing, and pedaled away across the room. As he rode, he withdrew a conductor’s wand from his pocket and waved it about in the air.

The music changed to the tiny tinkling of bells, the dash of the triangle, the thin notes of a slide whistle. Then, rising out of the gramophone at the end of a pink balloon was a mouse in a tiny pink dress with white polka dots. She drifted through the air until she hovered over the old man’s desk.

The music changed again, suddenly fast, horns and trumpets and the trombone dashing off notes. A sparrow shot out of the gramophone so fast she was all but a blur. She wore the goggles and leather helmet of an old-time pilot and carried in her claws a letter with a bright red seal. After several circuits of the room, she swooped over the old man and dropped the letter into his open hand.

The music then changed to something more stately. Riding a stick horse with great dignity was a grey cat, dressed sharply in tall black riding boots, a fine jacket decorated with epaulettes, and a tidy little hat. She rode his stick horse right up to the old man, tipped her hat, then curled up at his feet and began to purr.

Surprised and delighted by his wonderful new friends, the old man opened the letter carried by the sparrow. Inside he read the words, Thank You.